The Joy of Ice Cream 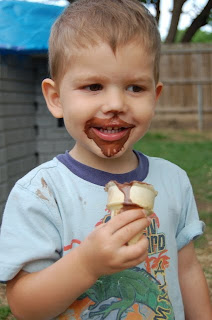 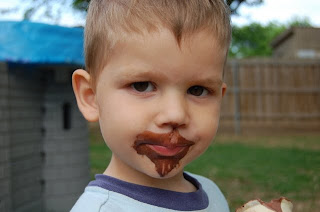 We had some good friends over on Tuesday evening for dinner. Neil was gone for the evening, as was the husband of my friend. We had such a special time of conversation and enjoying the kids. After our gourmet dinner of hotdogs, chips, and fruit (ha ha), we scooped up ice cream cones for the kids. I should have gotten pictures of everyone, because they all had chocolate ice cream on their faces. At the last minute, I decided to grab my camera and capture Micah's face. We were all getting a good laugh out of this one! It occurred to me afterwards that he's never really had the opportunity to just eat his ice cream and make a big mess like he did that night! I think he had a good time!
Posted by Kendra at 3:36 PM 1 comment: 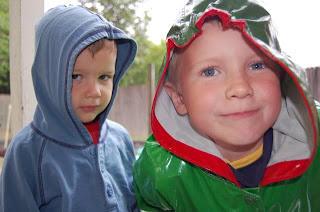 Here are the boys last Sunday while out helping Neil with the fence. It was cold and rainy, but still refreshing in its own way! Oh, how I love my boys!
Posted by Kendra at 3:34 PM 1 comment:

Update on the Garden 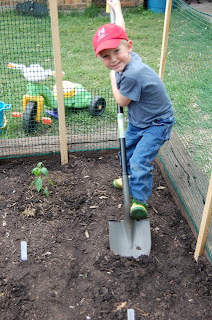 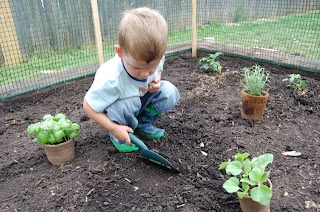 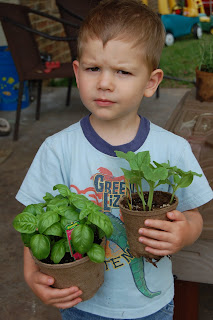 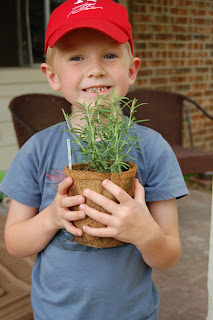 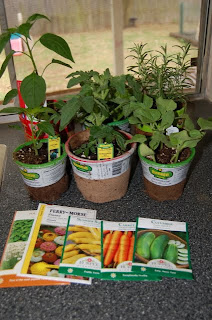 We finally got our garden planted this past week. On Saturday some friends who have a truck helped us to get a load of dirt. Then on Sunday, in the middle of a cold and drizzling rain, Neil put up a fence of sorts to keep out the rabbits and the dog. ;) We decided to wait until it warmed up again to plant, which ended up being on Tuesday. Both boys were very helpful and dug holes and planted seeds and plants. We planted squash, cucumber, carrots, and a handful of herbs from seed. We also put in a few started plants...tomato, jalapeno, bell pepper, basil, rosemary, and cantaloupe. I hope that God will bless our little garden, despite the fact that we are novices and have much to learn!
p.s. Micah had just woken up from his nap when I took this picture. Can you tell??
Posted by Kendra at 3:23 PM No comments: 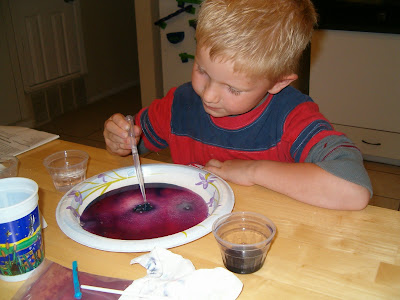 Joshua and I have had the best time with the science project kit that he got for his birthday from his Uncle Doug and Aunt Emily! We've done several of the projects so far. They all revolve around learning about acids and bases. In this project, Joshua was able to make a volcano (out of baking soda, flour, and red cabbage powder) and then pour a citric acid mixture on top of it to make it bubble and froth. He played with this until everything finally neutralized and he couldn't get a reaction anymore. :)
Posted by Kendra at 3:00 PM No comments:

The Boys in the Blue Bonnets 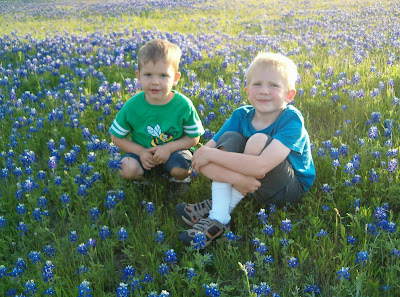 It must be a Texas thing...but the blue bonnets are beautiful! There's a patch close to our house that Neil told me about. So, yesterday evening we loaded up to take a few pics. The sun was behind us, unfortunately, and I had my small camera with me, not the Nikon. So, the picture isn't the greatest ever. Consider it more of a "right of passage". Ha ha!
Posted by Kendra at 4:10 PM 1 comment: 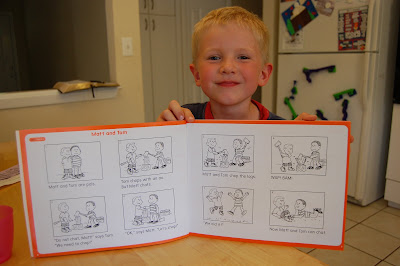 I can't believe that I'm writing this post so soon! On Wednesday, Joshua officially read his first book. He was so excited about reading the book that he leaped across to give me a big hug! I'm so proud of him, and very thankful for my neighbor. Let me explain. Our neighbors next door have two daughters, age 2 and 3. We've been getting to know them and at one playdate got to talking about teaching our kids how to read. She mentioned that she had a Hooked on Phonics 1st grade packet that she would give me, because it would be a couple of years before she would get to use it. So, last week, she brought it over. Joshua and I started working on it almost immediately. We've done other workbooks and such, but I think Joshua took to this one mostly because it did come from our neighbors. It was a big jump from what we've been doing, but Joshua has done great. He sounded out 90% of the words in the book on his own. There were only a couple of sight words that he had trouble with, which we just hadn't worked on before. He read the book again yesterday, and this morning insisted that we do school again at 7 a.m. Yikes. ;) He's working hard to cover more words so that he can read his next book!
Posted by Kendra at 7:54 AM 4 comments: 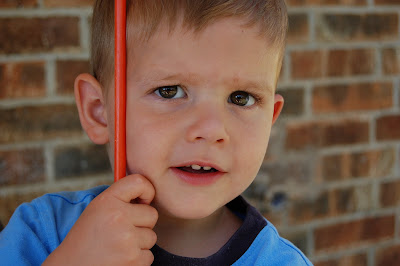 A good word to describe Micah would be intense. There is an energy that flows from him that is different than his brother. It's hard to describe...you would just have to be around them often to understand. :)
Posted by Kendra at 8:31 AM 5 comments:

Easter with the Cousins! 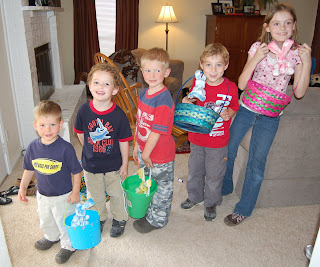 We were blessed to have my brother and his family come to stay with us on Easter weekend. My parents were also able to join us for part of the time. We had a great visit and really enjoyed their company. On Saturday, we had an Easter egg hunt! The kids had a great time. Here they are before the hunt and then afterwards, digging through their baskets! :) Of course, there is much more to Easter than just hunting eggs. We are so thankful that Jesus is our Savior and that we can celebrate the fact that he is alive today! But it is still so fun to enjoy traditions, especially with those that we love so much!
Posted by Kendra at 5:36 PM 2 comments:

All of us in the Giga Ball! 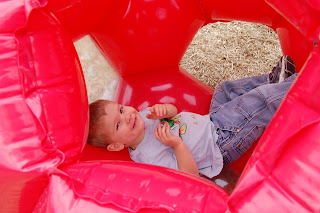 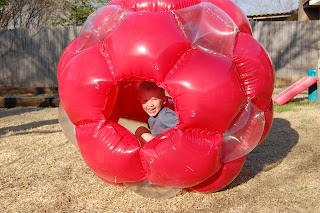 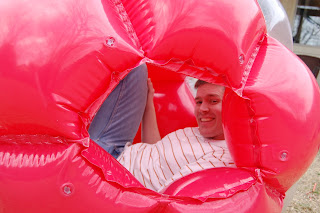 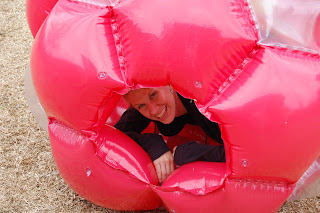 This post is for Doug and Emily! I've been meaning to post this for awhile. We have all enjoyed playing in the Giga Ball! Many thanks!! :)
On another note, I just saw the trailer for Letters to God. It looks great and I can't wait to see it. These are the kinds of movies we need to go see in the theater, to show our support!
Posted by Kendra at 9:29 PM 1 comment:

I sat on the back porch tonight with my best friend (my hubby, if you weren't sure...), talking together, enjoying the nice breeze, laughing at our hilarious dog, and watching my boys actually play well together. Not all nights are like this, but tonight was nice.
Posted by Kendra at 8:47 PM 3 comments: 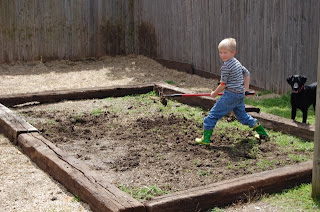 All of a sudden, it's time for the garden. A week ago we had snow. Now we have 80 degree weather. And...it's time to finish the garden prep and plant. Here is Joshua helping to break up the ground. He's been helping to break up the grass clods and get them out of the garden area. He's also been digging for dinosaur bones. :) One of these days, he might actually find some! This picture was taken over a week ago. There is now a really big hole in one corner that is his favorite "dig" spot. Micah enjoys hunting for worms, of which there are plenty! This is our first official garden experience. We inherited a garden with the house we had bought in AR a few years ago, but it was already planted and growing well. This should be fun and interesting! I've been researching what grows well in our county, as we have funky dirt! Also, I'm praying that we can keep the rabbits out and that we don't have an infestation of grasshoppers! If you have any tips or advice, please send them my way!!
Posted by Kendra at 7:21 AM 2 comments: