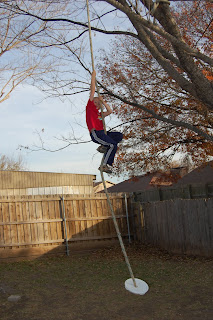 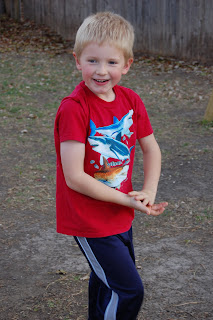 Joshua has climbed to the top of our rope swing many times. This was one of those times. He was so proud of himself when he was finished, as you can see in the second photo. :)
Posted by Kendra at 3:32 PM 1 comment: 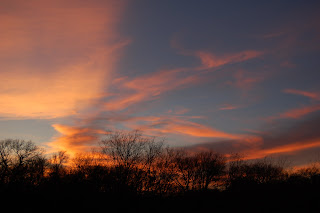 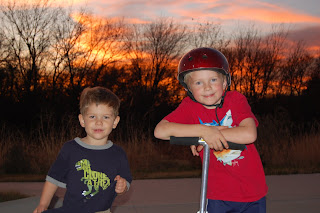 Believe it or not, this was taken in early December. I missed posting pics for basically the entire month, so I'm going to slowly go back and post about what we did. This was one of those warm December days before the cold really set in. We've had some beautiful sunsets over the past couple of months, this one included!
Posted by Kendra at 7:16 PM 2 comments:

A picture is worth a thousand words, right? 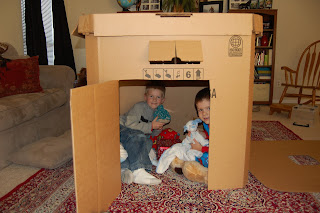 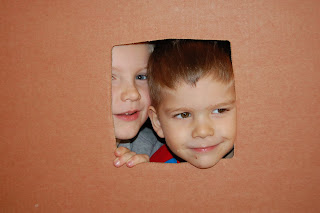 My boys love to play in boxes, especially really big boxes! I could easily take a thousand words to describe the fun (and frustration) that has been had with this giant box over the last couple of days. They have had a blast playing in it. It reminds me of a box that used to be in my kindergarten class so many years ago. I have such fun, vivid memories of it. I hope that they remember something of their play with this one.
I could also use a thousand words to tell you the story of why we even have this box to begin with. But I won't. I'll just give the shortened version. We had to have our outside heat/air unit replaced, and it's not even a year old. Something went very wrong with the compressor. Thankfully, Neil knew that the noise it was making was not normal and gave the heat and air guys a call. And thankfully, it was still under full warranty. So, we have a new unit to replace a practically new unit, and...a really COOL box!
Posted by Kendra at 2:04 PM 1 comment: 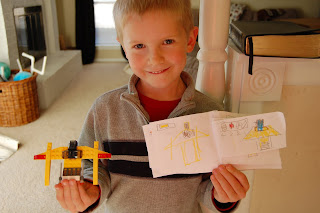 I cannot express to you how proud I am of this boy! Let me explain this picture to you. Joshua is totally into Legos, and builds and rebuilds his sets often. This picture is of him showing off a "set" that he created and the instruction manual that he drew/wrote on how to build it! The manual is several pages long and goes through, step by step, how to build his plane! How cool is this!!! It is in moments such as these that I am overwhelmingly proud of and thankful for this boy that God has blessed me to help raise!
Posted by Kendra at 1:58 PM 2 comments: 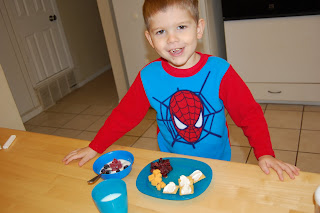 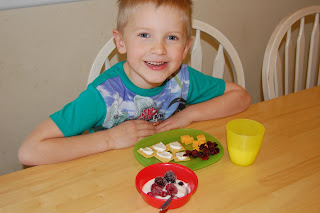 The boys and I wrapped up a week of school on Friday with a dairy party. The subjects covered this week were cows, farms, dairy farms in particular and more! We learned many interesting things over the course of the week. Then they enjoyed eating several yummy dairy products, including milk, yogurt (w/berries), cheese cubes, and cream cheese on crackers (w/cranberries). They followed that up with a big bowl of ice cream, of course. It was a fun end to an interesting week.
Posted by Kendra at 1:52 PM 1 comment: 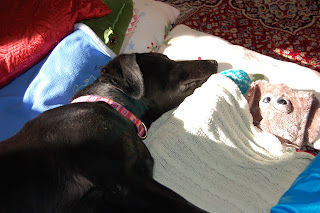 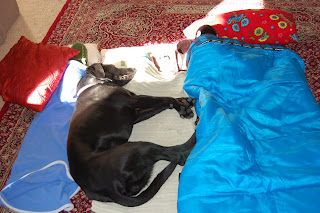 The other day, Joshua had been playing with his stuffed animals and had put them down for a 'nap'. What he didn't realize for a long time was that there was an intruder. :) Ziva came and curled up among the animals, eventually making herself completely comfortable. She was nestled in beside the alligator and the whale shark. When Joshua did finally notice her, he pounced on her. Too funny!
Posted by Kendra at 7:09 PM 1 comment: 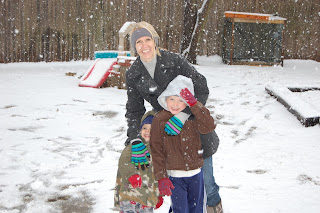 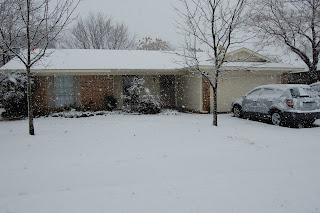 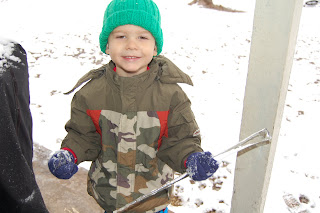 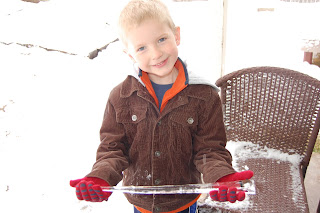 The boys have had a BLAST tromping through the snow. It started snowing yesterday, late morning, and it kept snowing all day long. They wanted to go out when it first started snowing so that they could catch snowflakes on their tongues. Then we had snow cones. Later we went out and had snow ball fights. Joshua and I had THE best snowball fight ever (according to him). :) I had a good time, too. This morning, we went back out to enjoy the snow before it started melting. They had a great time scouting for icicles. I enjoy the snow, but I don't enjoy not being equipped to be out in it. It happens so infrequently, and the boys grow so quickly, that I don't have snow suits or good mittens for them. We just layer and come in when it gets too cold!
Posted by Kendra at 3:58 PM 2 comments: 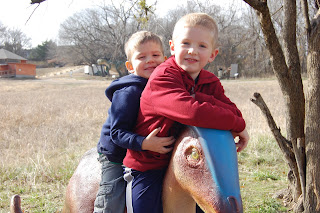 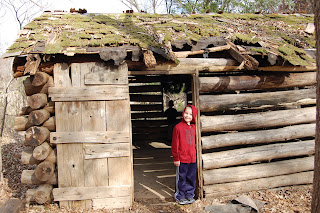 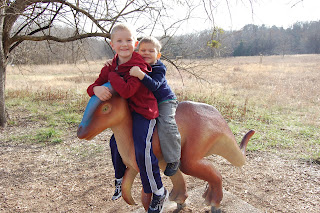 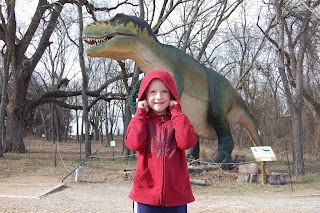 A local museum and nature center has a very fun dinosaur exhibit right now. There are several life-size, animated dinosaurs along one of their nature trails. The boys like to see them, mostly. Joshua was holding his ears while T-Rex roared! I love the pics of the boys together!
Posted by Kendra at 5:54 PM 1 comment:

"The ultimate reason for setting goals is to entice you to become the person it takes to achieve them." - Jim Rohn
One goal I have is to post here more often... about my boys, life, God, food, school and more. Check back soon!
Posted by Kendra at 7:10 PM No comments: