On the Jeep Trail 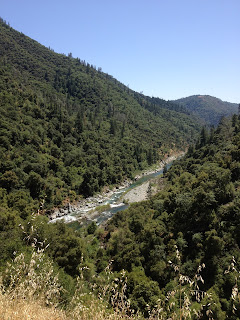 It's been a couple of weeks since I posted.  We were out of state for more than a week visiting family and friends. More on that later. Let me tell you about Monday! We explored a jeep trail about an hour from our house and had a blast! This is the view from one part of the trail. We followed a stream for a bit, which eventually got bigger, and then flowed into a river, which we found out later was the North Fork of the American River. 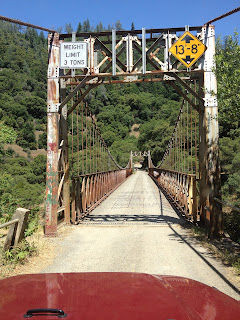 Here we are crossing over a very cool suspension bridge over the American River. We parked on the other side and went down to the river's edge.  There were so many people at this spot that it was hard to find a parking spot.  The water was moving quickly and was very cold!  The boys could have stayed and played for a long time.  We let them poke around a bit and then headed on up the trail. 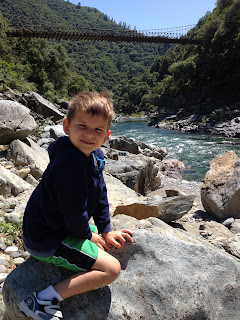 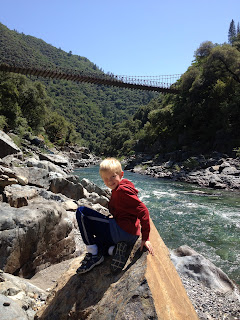 Here are the boys, with the river and the suspension bridge that we had just crossed in the background.  There were several people swimming and sunbathing by the river.  And down stream we saw several kayaks on the water.  Popular place! 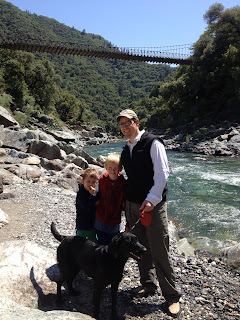 Here is a great pic of my guys and Rox the dog!  She tried to go swimming.  It was hilarious to watch, as she was very confused by the current. :) 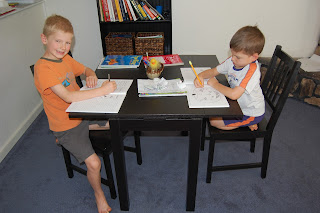 We are still in full swing when it comes to school!  Thanks to the move, we are a bit behind where we should have been by now.  But, we will keep plugging along until we complete everything that we need to!  The boys are doing a great job this year.  I'm super proud of all that they have accomplished and learned!  Big J has started multiplication in math, and in history we are learning about the Roman Empire and the gladiators!  M man has been working through his very own workbooks and is doing a great job! Of course, there is much more to our day than that. I won't bore you with the details...just the highlights! :)
Posted by Kendra at 11:20 PM 1 comment: 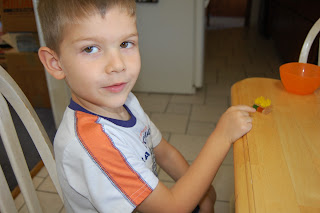 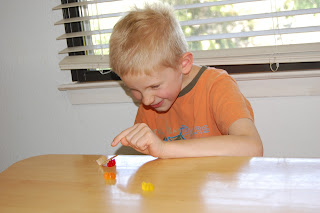 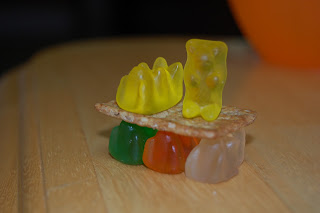 What do you get when you give a couple of boys some gummy bears and a few crackers??  Gummy Bears catipulting across your kitchen!  There's not much else to say except that, yes, this is what they did one afternoon for fun! :) There were LOTS of giggles during this activity!
Posted by Kendra at 11:14 PM 2 comments: 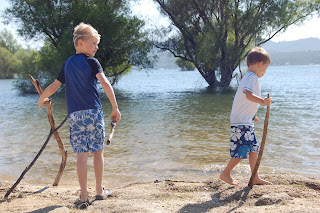 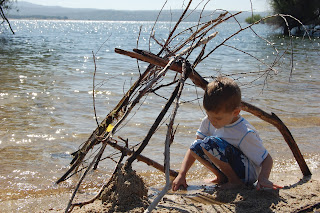 Mother's Day was the perfect day!  My hubby treated me (and the boys) to a delicious breakfast.  Then we packed up and went to the lake for the rest of the morning.  The boys had a great time building "sea" forts, exploring, and braving the cold water to get soaked!  I enjoyed relaxing with my wonderful husband, while watching my boys, and enjoying God's beautiful creation.  I was also able to sneak in a few pages of my current book.  We grilled out for lunch and then worked in the yard. It was the perfect mix of play and work!  Many thanks to my guys for such a wonderful day!
Posted by Kendra at 11:10 PM 2 comments: 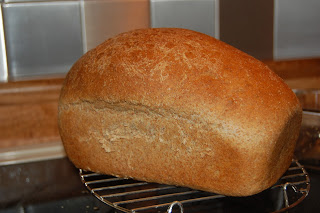 I finally did it!  I managed to make a decent loaf of bread!  For those of you who mastered this skill long ago, bear with me. :)  I've been on a journey lately to try and master this skill for myself. After trying several recipes for 100% whole wheat bread, with just the most basic ingredients, I finally stumbled upon one that I like.  Now, the official taste-tester (my husband) hasn't tried it yet.  He has to approve before I make another attempt.  Then, the challenge will be to repeat what I made the first time. After I've made a few loaves successfully, I hope to experiment with adding in other grains (in small amounts, of course), until I arrive at the perfect loaf...if there is such a thing. :)

Yesterday marks two months since we arrived in California.  Wow.  In some ways, it seems like it has been much longer than that.  And in other ways, it seems like we just got here.  The unpacked boxes we still have lying about will attest to that. :) We definitely like it, though it has been an adjustment on many fronts...new job, new house, new state (country??!), new friends (or hopes of some in the near future), new church (though we still haven't found the one that we hope will be 'home'), and so much other "newness" that I can't think of them all at the moment!

It amazes me that this is what was going on in my life just over two months ago... 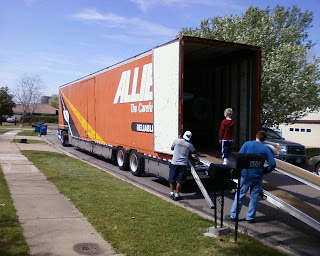 ﻿
There is so  much that I miss about where we were...the main one(s) being our family and friends.  To you that are so precious to me, now that you are missed and loved!

Posted by Kendra at 4:50 PM No comments: 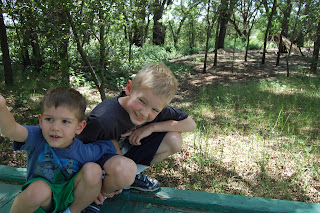 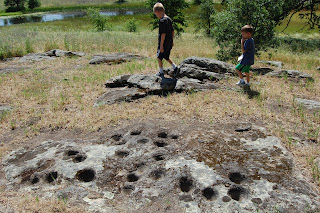 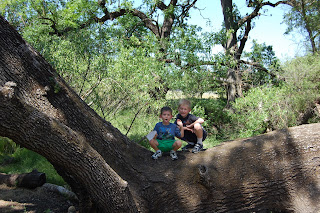 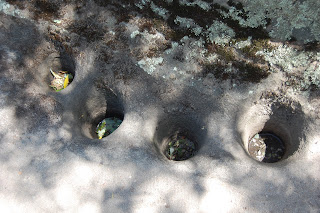 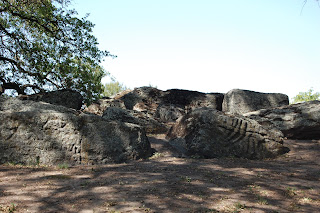 Yesterday, the boys and I took a field trip to a local museum to learn about the local Native Americans that (have) lived in this area for hundreds and possible thousands of years.  In our history studies, we took a break from learning about the ancient Greek and Roman civilizations to learn about what was going on in North and South America at about the same time.  We studied several ancient Native groups.

I decided to check out some local resources, not knowing that they would fall so closely into line with what we were learning.  The museum we visited teaches about the Maidu people.  It also has an interpretive trail that goes by several sights that have petroglyphs, which are pictures carved into rock, and mortar holes that were chiseled into the rock by these people.  They would have used the mortar holes to grind acorns into meal.  It was fascinating to learn more about these people, this area, and the land that would have sustained many families.  In the above pictures, you can see some of the mortar holes, as well as one of the main petroglyphs (pictured above in the last picture - it is towards the right on one of the front rocks). 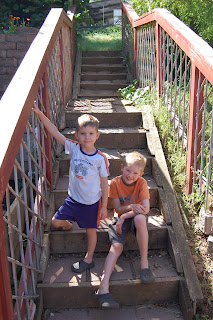 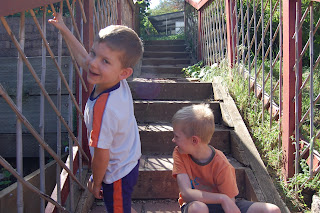 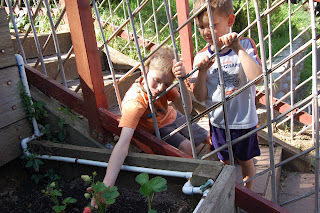 Our mornings are full of many  activities...school, checking on and taking care of the chickens, checking on the garden, stretch breaks to go run up the hill, chores, and so much more.  I realized yesterday that I haven't been pulling out the camera to capture any of these moments.  Oops.  Sometimes, life gets the better of me and I forget to do some of the most important things (at least to me), like documenting our lives through pictures.  That being said, here are the boys checking on the strawberries and posing for a picture on the steps by the garden!
Posted by Kendra at 4:33 PM No comments: 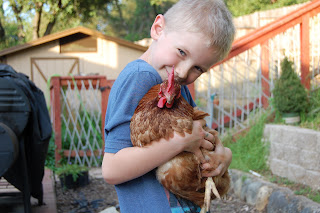 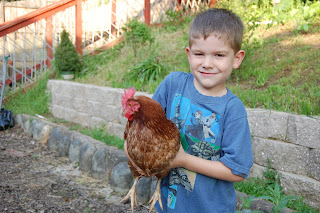 Noiser.  That is the name of the boys favorite chicken!  They love Noiser.  And they want to follow her around, and carry her, and pester her, and...well, you get the idea. :) She is a good hen, and very patient with the boys.  And she happens to be our best egg layer, at least for the moment.  She was named Noiser because when we got the chickens, she was the noisiest one.  The funny thing is that she is now one of the quieter hens.  Hilarious!
Posted by Kendra at 5:01 PM 3 comments: