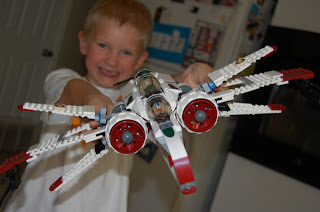 I must say that I am super proud of this guy! He has been saving for a LONG time to buy this Lego set. There were several times when he was tempted to buy something else, but then was reminded of his goal, and kept on. He ordered it with the help of his daddy, and even got a better deal than he originally thought he would! It was waiting for him when we got back from my parents house yesterday. He worked through dinner, without eating, to put it together! And, he put it together all by himself, of course! What a kid!
Posted by Kendra at 5:12 PM No comments:

Where did the month go??? We've had a very fun, full month, and I can't believe it's almost gone. Here's a little bit of what we've been up to! 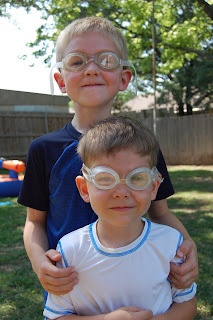 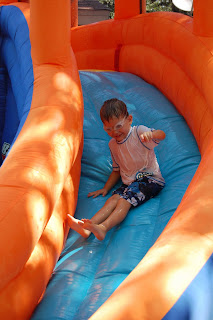 We set up the water slide one weekend and had a blast. We had several different friends come to play! Neil and I even slid down a few times...scary, I know! :) 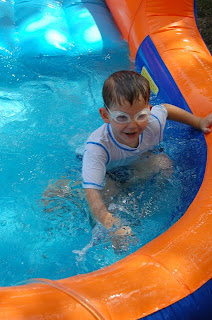 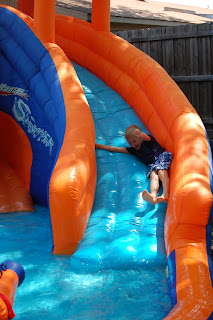 Joshua had sports camp one week. It was awesome! It was a christian based program that taught specific sports skills and also had bible applications for how to be a good sport, etc. He loved it. His specific sport was soccer! 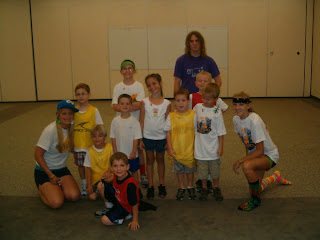 I grew a gigantic zucchini...completely on accident. We had been out of town for a week. I had checked over all of my plants to pick before we left, but I must have missed one, because this is what I found when I got back! 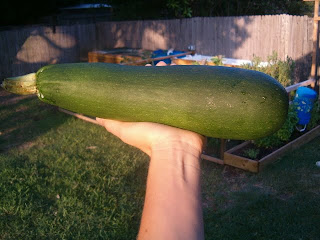 We got a new puppy! I don't have many pictures of her because my camera has been acting up. Her name is Roxie(y), though we haven't decided on the spelling for certain. :) She's cute, and she's a puppy...very rambunctious! She'll be 10 weeks old on Monday! 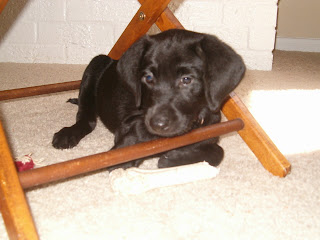 The boys are, well, boys! Here is one attempt to get a picture of them. See what I'm up against?! 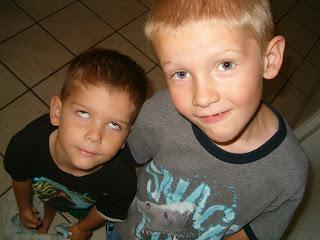 Joshua lost a tooth, actually two teeth. This was the first of two within a weeks time. And, when the second one came out, I officially gained the title of worst parent ever. Let's just say that the tooth fairy forgot to leave money for the tooth not just ONCE, but TWICE! It had been a long week, but still, how could I forget TWO nights in a row. Ugh! 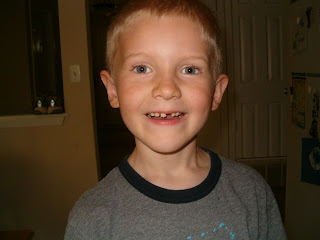 We have spent many days inside because it has been SO hot. And we just got back from a trip to my parents house to swim in their new pool! We had a blast. Again, no pictures of our fun times swimming with them because my camera was acting up. I sat down this afternoon to try to diagnose the problem and it was working just fine. Frustration! Oh well! That's about it for the month of July!
Posted by Kendra at 4:54 PM No comments: