By the look of my blog, you might think that nothing happened this month. On the contrary, it has been a very full month. The biggies would be that school started...and we harvested honey...and the boys started gymnastics (M-man) and swim (Big J). Those are all pretty big 'things'. But lots of smaller 'things' have been going on in between. Here's a glance at a few of them. 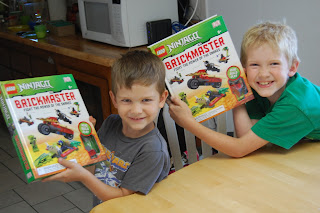 The boys saved up their money and bought Brickmaster sets.  These sets are super, and allow so much more creativity than a regular set. 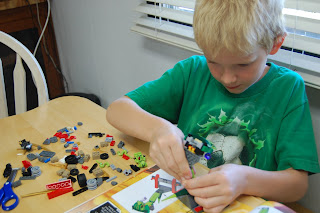 Big J had a blast building! 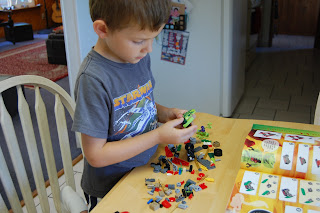 M-man can follow the directions and build complicated sets these days.  What a boy! 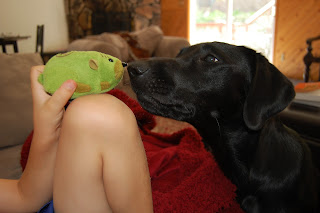 The boys have had their fun at the expense of our dog, Rox. The Zhu Zhu pet just about drives her (and us) crazy! 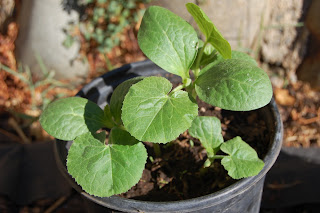 The boys have been growing seedlings...these are spaghetti squash. I hope to get them in the ground this weekend. 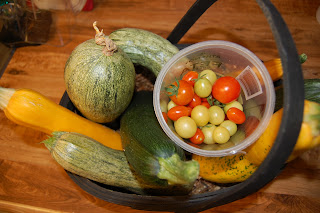 Our garden has been very plentiful. We've had lots of zucchini, yellow squash, tomatoes, herbs, tomatoes, peppers, and cucumbers. I have since completely overhauled the garden.  Everything, with the exception of my best tomatoes and peppers, have been pulled.  It's time for fall planting!  But that's a story for another day. 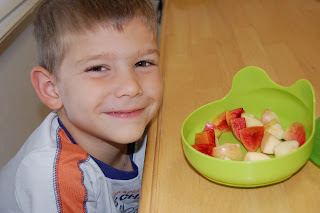 We have enjoyed more fruit from the trees in our yard.  Here, M-man is eating peach and apple bites.  He requested I take this picture. :)  We haven't gotten a ton of fruit.  We have enough pears, apples, and peaches to satisfy...but not really enough to try canning and such.  Maybe next year. 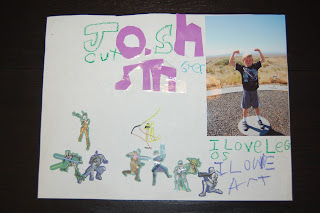 Some artwork for school...courtesy of Big J.  More on this later. :) 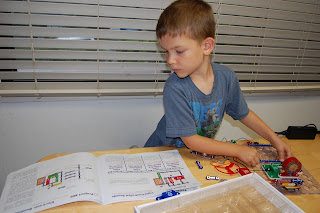 And last but not least...M-man trying his hand at circuit building.  He's becoming quite the builder.
Posted by Kendra at 11:48 PM No comments:

So, let's not talk about how I haven't posted all month.  Let's talk about honey.  Our honey. From our bee hive!  How exciting is that!!!  Last week while Neil was home, he decided that it was probably time to harvest honey.  He had another bee guy come out to confirm.  And then it was off to the races...or at least, off  to the beekeeping store to rent an extractor. 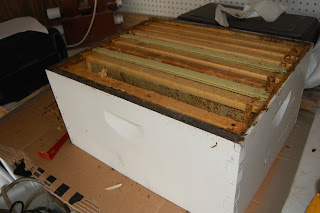 Here is one box (or super) from our hive.  We have a three box hive.  Each box has ten frames in it.  You can only see nine in this picture because one was already pulled out. 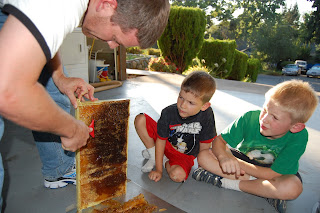 The boys were fascinated with the entire process and were very helpful.  It was not an easy job...Neil did most of the hard 'labor'.  But the boys did their part, as did I...I hope...someone had to provide tools (spatulas, pans, containers for the wax and drippings, etc...and help with all things STICKY.  Oh, and make dinner...somebody had to feed all of the workers. :) 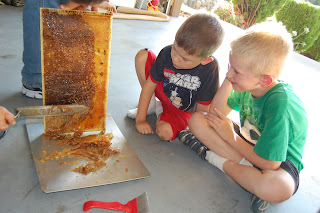 First, Neil had to take a hot knife (it actually plugs in) to cut the wax cappings off of the front and back of each frame. This took time and care. 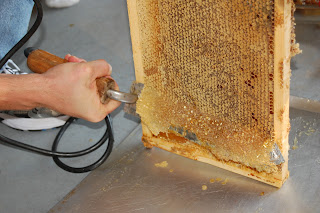 Here is an up close pic of the cappings being cut off. 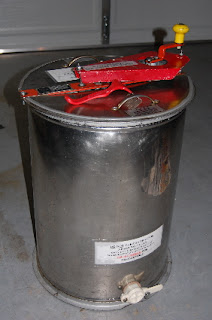 Side note:  Here is the extractor.  It is a 3 frame extractor...so, obviously that would mean that 3 of these frames would fit into it after the wax cappings had been removed. 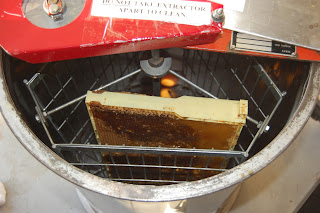 Into the extractor goes each frame.  Then the lid is closed and it  has to be cranked by hand to get the honey to come out. My AWESOME husband did ALL of that work.  Wow! 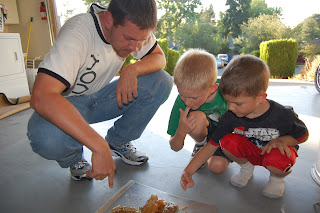 We had to taste it as we went along...of course. :) Sadly, I did not get any pictures of the guys actually turning the crank on the extractor.  The boys both took turns helping.  I must have been either cooking or cleaning or hunting for 'tools'. :) 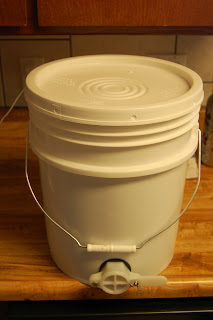 After the honey was extracted, then it was poured into this bucket, which was fitted with a fine, mesh filter.  The honey very slowly flowed through the filter...to get rid off bee parts and wax parts and such.  That, my friends, is a 5 gallon bucket nearly full of honey.  By the way, it took the better part of two days to get the job done and everything cleaned up.
And I still have sticky doorknobs. :) 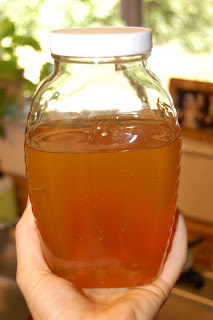 Here is the first jar we filled.  Isn't it beautiful?? 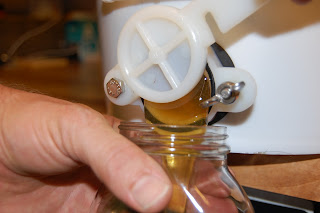 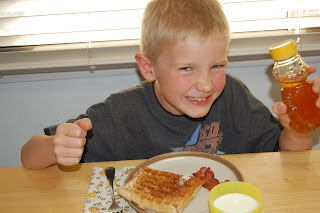 We had to celebrate!  The next night we have waffles and bacon with HONEY for dinner.  That honey bear that Big J is holding was nearly empty by the time we got done with dinner.  I even made a double batch of waffles, thinking I could throw some in the freezer for later.  We ate all but TWO waffles.  It was good! 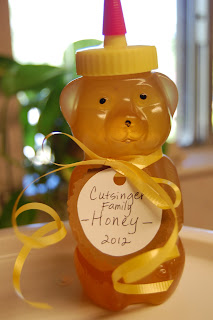 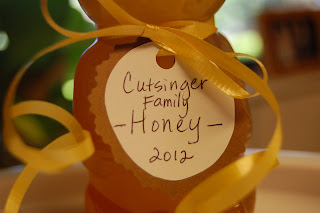 What an amazing experience!

We have other toys?? 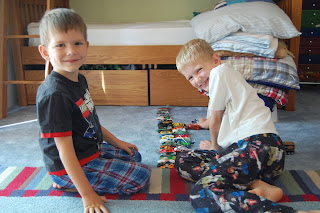 The boys got their Lego's taken away last night for not cleaning them up.  Today, they have been breaking out all of the other toys they have but don't really play with that much. The matchbox cars took over much of their bedroom floor this morning!  Nice!  Other toys that have made an appearance this morning...hex bugs, marbles, and lots of other things!

p.s. Today is laundry day for the boys linens.  They are learning how to wash and dry them.  But they still usually get a free pass on making their beds on laundry day, as it's hard to get the fitted sheets on the bunk beds.  Any ideas on how to get past this??  They can easily make their beds when they can get around all sides.  But with having the beds bunked, and Micah being on the top bunk right now, it's kind-of challenging... :) 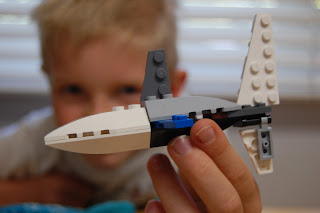 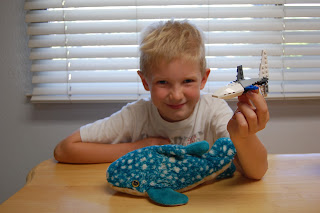 An Early Morning Walk to the Lake 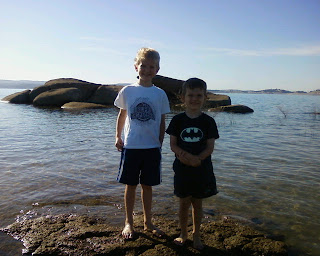 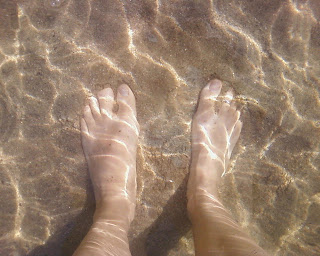 The boys woke up this morning CRAZY.  They were fighting and bouncing off of the walls from the time they got out of bed.  Good grief.  I had to take action...so right after breakfast I had them get ready and we walked the dog to the lake for a quick swim...and of course some exploration time for them. :)  We had a blast.  It was early, maybe just after 8 a.m., but it was already warm and very sunny.  We took off our socks and shoes and waded around in the lake.  The water was super clear and the temperature perfect.  In the second picture, if you look closely, you can see Rox swimming.  She is in the water, back behind M-Man, just at the top of his head in the picture.  She is a funny dog, and will just swim and swim and swim. :)
Posted by Kendra at 12:22 PM No comments: 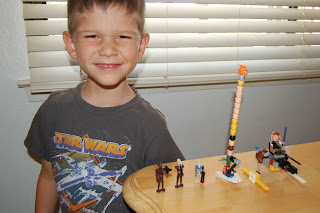 Oh, how I love this boy!  He brings a smile to my face (and heart) every day!  M-Man is head over heels for Lego's.  He is finally getting to the point where he can build more complex things on his own.  His creativity in this area is super fun to watch and he has a blast coming up with his own sets to build.  Here is one that he insisted I take a picture of.  It includes a guy with a REALLY long neck.

P.S.  Awhile back, he started squinting in all of his pictures.  Slightly frustrating, but it's probably just a phase that will pass.  I hope. :)
Posted by Kendra at 4:55 PM 1 comment: 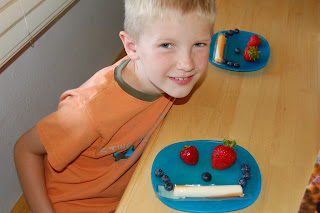 The other day, after I had set a snack out for the boys, I came back to this...it made me smile, and not just because the fruit and cheese stick were "smiling". :)  Lord, help me to step back often enough to let the creativity and humor of my boys to shine through.  These were Big J 'originals'.  Notice in the background that he had also arranged his brother's snack.  I love those moments when, completely unprompted, one of the boys shows his love for his brother!
Posted by Kendra at 4:46 PM No comments: